My name is Debbie and I am the proud grandmother of Jacob Chalmers who has Sanfilippo Syndrome Type A. Jacob is cared for greatly by his parents, Wes (father) and Donna (mother), and his sisters, Jamison and Alexis (both unaffected by Sanfilippo) but I am Jacob’s spokesperson. He is very much loved. 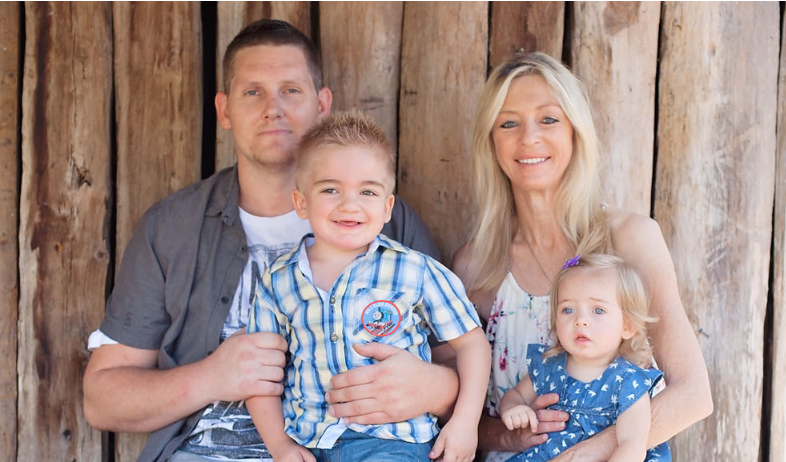 At around one year of age Jacob developed sleep apnoea and suffered from recurrent ear, nose and throat infections. At 15 months Jacob’s breathing got worse and someone would have to watch him at night as he would stop breathing. As his Nan, I would stay awake with him. Sometimes he would stop breathing every 2-3 minutes. It was very frightening. All night we would gently jolt him until we could get him into a regular breathing rhythm. I usually slept from 5am to 7am, and would be woken by Jacob with a bottle in my face. Luckily it was gentle! (We already had this great bond between us). You see, if Jacob is awake – you have to be awake!

We were many months before we got a diagnosis of severely inflamed tonsils and adenoids and then later a diagnosis of Sanfilippo Syndrome. Before he was two, I would get a flash of something when I looked at him. He was so beautiful to look at but still something did not feel right in the back of my mind.

Jacob loves books and has always been very intense when playing with books. We noticed that he would not let his books become untidy. They had to be aligned in rows with the names appearing in perfect lines in his bookcase. This obsession and the “something” in the back of my mind led me to ask his Paediatrician to run some tests. At this stage I thought maybe he had a mild form of Autism. Bloods were taken for testing.

About a week later I received a call from his paediatrician who asked us to come to his rooms the next day. This disturbed me and I tried to get him to tell me what was wrong over the phone, but his reply was “Debbie, I have to see you all in person”. We had no idea how our lives were about to unravel.

Our paediatrician was in tears as he choked out our Jacob’s diagnosis and prognosis. This experience is hard to put into words. My brain was listening but fragmenting into a thousand pieces. I felt like I was choking. I looked at Wes and Donna and they were in shock. Donna was 6 months pregnant and expecting Jacob’s little sister, Alexis, at the time.

We were told that Jacob has Sanfilippo Syndrome Type A. The doctor told us to go home and enjoy the next five years. Jacob was just two years old. He explained what would happen after that, loss of speech, loss of the ability to walk, loss of muscle function, loss of hearing, loss of even the ability to eat. All I could hear was loss, pain and suffering for his little body.  There is no one to blame; it’s a random act of nature. I asked our paediatrician why he thought to request a test for such a rare disorder. His response was: “Just the fact that he is blonde with such dark eyelashes and eyebrows”.

We were broken. Every day for months, the first thing I would think as I woke was that I was in a nightmare. To this day I still hear his words ringing in my head: “there is no hope”. But as a parent or grandparent how can one accept that there is no hope for their child or grandchild?  We rushed about but were running out of avenues. We saved stem cells from babies born into our family in a bid to find future treatment. I became more and more depressed, functioning yet suffocating.

Our lives were in those few minutes following diagnosis, seemingly destroyed. Everyday we got up with this great black shadow looming over our family. Yet we had to get up and make every day a special, wonderful and happy new day for Jacob. We love this little man so much and we are haunted by the days we may never spend with him. But this is not about us: this is about Jacob and our Hope for Jacob.

No one wants to outlive their grandchild. I have tried to comfort Wes and Donna but as his parents, it’s very hard on them. They cannot deal with this and the only way that they are able to cope is denial to a certain point. They cannot speak about it, they just break down.

I have never seen a child with a thirst for life like Jacob. He wakes up beaming. He brightens every room he enters with his coy and mischievous smile. He bursts with love and energy. He is “Daddy’s little man”, “Mummy’s little Jakey-bear” and he loves his sisters, Jamison and Alexis so much. I am honoured to have this little guy in my life. He says “Nani, I wuvs you” and I call him  "my honey-poodle". He loves everyone around him.

Jacob has been the biggest fan of The Wiggles practically since birth. He lights up at even the mention of their names. Jacob loves the outdoors, he loves to run and jump and play ball. Home life is hectic. Jacob never stops. He warns me when he’s about to do something he knows he shouldn’t. He yells to me “Are you ready?”, that’s when I know I have to run, but he’s smart enough to know not to attempt anything too dangerous until he knows I’m close enough to stop him!

Life is a constant barrage of appointments, speech therapy and looking after his health and well-being. He keeps the three of us on our toes. The phone goes in the washing machine, the taps get turned on, the microwave has had to be disconnected! I’m sure a lot of Sanfilippo parents can relate to this. What keeps us going is his smile and every moment in between…and hope.

After diagnosis someone told me about the Sanfilippo Children’s Foundation and I quickly emailed for more information. We were invited to meet Sanfilippo families but we could not at that stage cope mentally or emotionally with seeing other children who may be more advanced in this condition. I worried about breaking down in front of those special parents and their children. Then it was just by chance, late one night as I walked past the TV that I overheard something about a genetic condition on 60 minutes. I had no idea what the condition was. When this program aired I near went into shock when I saw the familiar face of Megan Donnell. And this is where our real hope started.

At present Jacob is mild to moderately speech delayed. We strive to keep him as fit and healthy as we can to try to delay the full onset of the condition but I have heard that sometimes this can happen over weeks which is really scary. We must act quickly as we have about a year before this devastating condition starts to take more effect on him. I ask Jacob what he wants to be when he grows up. His reply is “Nani, a doctor” (probably because he’s seen so many).