I chose to start our story from this point in our lives as previous to arriving in Australia, we lived a relatively normal life. Our children were happy and healthy, and as a family, we were content, with nothing out of the ordinary to report. 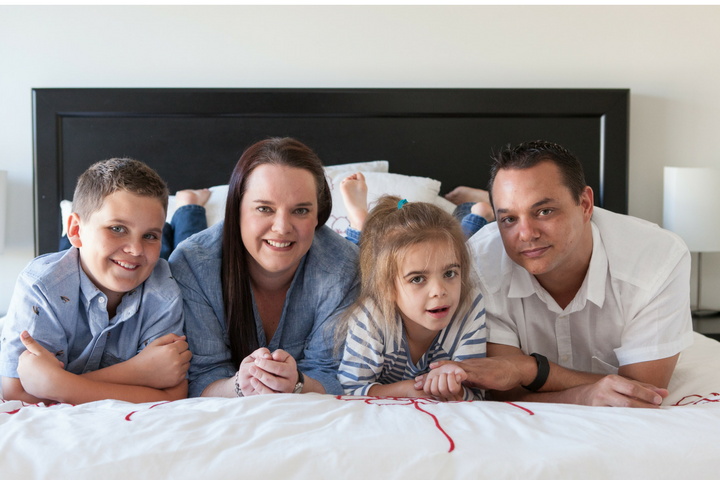 In March 2010, after months of planning, we left our native Johannesburg (South Africa), and arrived in Australia. Shaun’s Australia based employer offered to be our business sponsor in our 457 Visa application process. We initially settled in Brisbane so that Shaun could start up their Brisbane office.

Kyle started school (prep) just a week after we arrived in Brisbane and, as we did not have a family or friendship group close by, we decided that it was best for me to stay at home with Meckenzie. Besides the life changing event of moving countries, and after working full time for the previous 7 years, I now found myself in a new position as stay-at-home mum, and keeper of the house too.

Eventually we all got in the swing of things and, in general, enjoyed life in Brisbane for the next 15 months. During this time we noticed that Meckenzie was a little delayed with her speech and toilet training, but at the time, we attributed it to the lack of positive peer pressure due to not being in daycare nor regularly around other children during the day.

In July 2011, after much discussion, Shaun transferred within the company again and we moved to Melbourne. Shaun’s father and step-mum had already been living in Melbourne for 12 years, and we chose to move closer to them for support, and so that the children had grandparents close by to enjoy and spend time with. It was the best decision for us in that we could be closer to family, and we quickly made life-long friends within the community through Kyle’s new school.

I started full time work again and Meckenzie started pre-kinder. She loved it and embraced the new change, she became our social butterfly.

During 2012, we started noticing that Meckenzie was still not catching up to her peers. Although her speech and vocabulary, and toilet training, was doing better, she wasn’t where she should have been. She also suffered regular bouts of vomiting and diarrhoea. At one stage, during the latter part of the year, we had two visits to the emergency room in a space of 2 weeks. The doctors attributed this to outbreaks of gastro in the community. I was sceptical, especially after the school confirmed that no other children had suffered gastro symptoms around that time. Still, we left things as they were, having faith that she would catch up once she started prep the following year. She would, in any case, be one of the younger children in prep, having only turned 5 at the end of October 2012.

Within a week of Meckenzie starting prep, her class teacher came to me, quite concerned and asked for permission to have her assessed by a psychologist. We, of course, agreed. She was assessed and diagnosed with a “mild intellectual disability”. It was a shocking thing to hear and accept as her extroverted and inquisitive personality screamed the opposite. It never crossed our minds that her delays might be permanent. The psychologist recommended that we visit a paediatrician, which we did, and the doctor ordered blood and urine tests, wanting to test for various possibilities.

About 3 weeks after our paediatrician appointment, the doctor called me, advising that the pathologist had picked up a possible metabolic disorder from the urine test, and that they require another sample for further testing. We obliged but were now quite concerned as the doctor advised the metabolic disorder to be mucopolysaccharidosis. We of course scoured the internet for information and read about all the different types, hoping that the results were wrong and that none of these disorders plagued our daughter.

On 23rd May we were called in to meet with the paediatrician to discuss the final test results. Sanfilippo Syndrome type A. This was the most shocking news we had ever been presented with, it was never expected. We were still trying to absorb the diagnosis of a mild intellectual disability; it was now the prognosis of a degenerative road to certain death before adulthood.
We have since enrolled Meckenzie in a special development school, which we believe will benefit her in countless ways, now and in the future.

Our devastation is and always will be beyond measure. We will never give up hope that a treatment will become available and we have faith that the researchers and scientists will never stop trying until they find the cure.

All things aside, Meckenzie, our beautiful social butterfly, will always remain perfect to us.