I was a Goulburn Valley farm girl who married at 18. My husband, Cec Thompson, was a racing car driver and later owned and operated a transport business. We were living on a sheep farm in Coomboona near Shepparton on the Goulburn River when we had our two boys – Wayne (born 30/12/64), and two years later Peter (born 24/9/66). 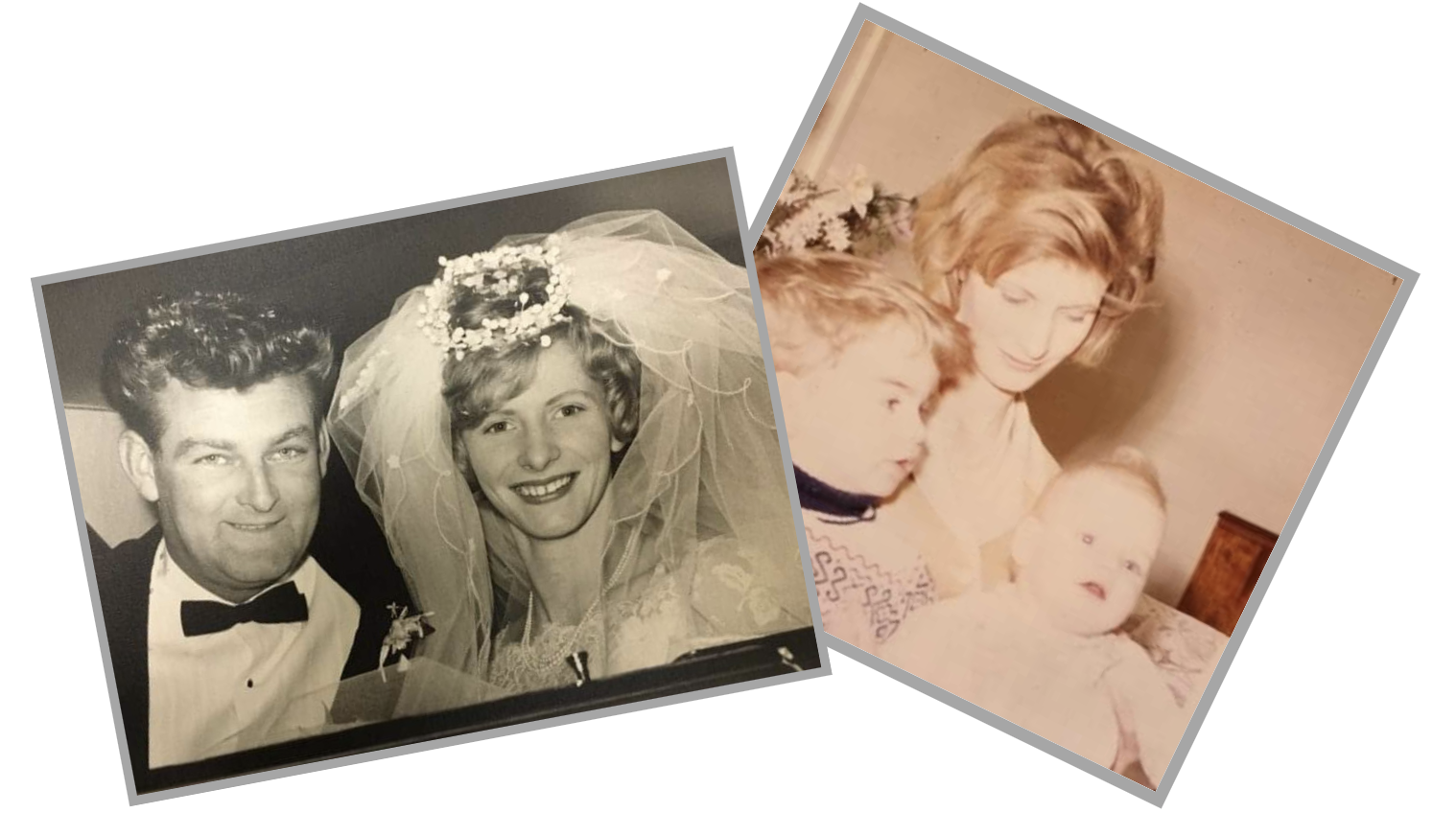 Wayne was a happy baby but had some trouble sleeping. He progressed like all babies but my mother – Muriel or ‘Moo’ as we liked to call her – had her suspicions from as early as 10 months of age. She was very much in tune with Wayne. They had a special bond from the moment he was born.

We moved to Kew in Melbourne as my husband expanded our transport business and Peter was born soon afterwards. By then, Wayne was nearly two years old and only saying a few words. He was slow to walk, was late getting teeth and got bronchitis a lot.

I kept taking him to the doctor but was told I was an “impatient mother”. However my mum insisted I should get Wayne checked, and so we were referred to the Royal Children’s Hospital (RCH) in Melbourne.

Wayne was admitted for four days of tests which turned into two weeks. It was extremely stressful. He was upset and confused by the strange environment, and after two weeks, I told them I was taking him home!

In 1967 Peter also underwent testing at the Children’s Hospital. The outcome of those visits was a tragic diagnosis for them both just two weeks before Wayne’s fourth birthday.

We were told they had a rare disease called Mucopolysaccharidosis. Wayne and Peter would not live to be teenagers. They would regress, and their lives would be taken prematurely.

I simply don’t remember leaving there as the same person. My husband was angry and disbelieving of the diagnosis. He never accepted that the boys were different at that time. There was little assistance or services in those days and I got support mostly from my mum.

We had to watch Wayne and Peter 24/7 to make sure they didn’t hurt themselves. They were both hyperactive and frustrated and at times would bite their fingers till they bled. I had arm bands made with padding inside to overcome this issue.

Wayne went through a stage where he would eat dirt and needed constant supervision.  They were both in nappies and they were not the disposable kind. Wayne had terrible diarrhoea but Peter did toilet train for a time. 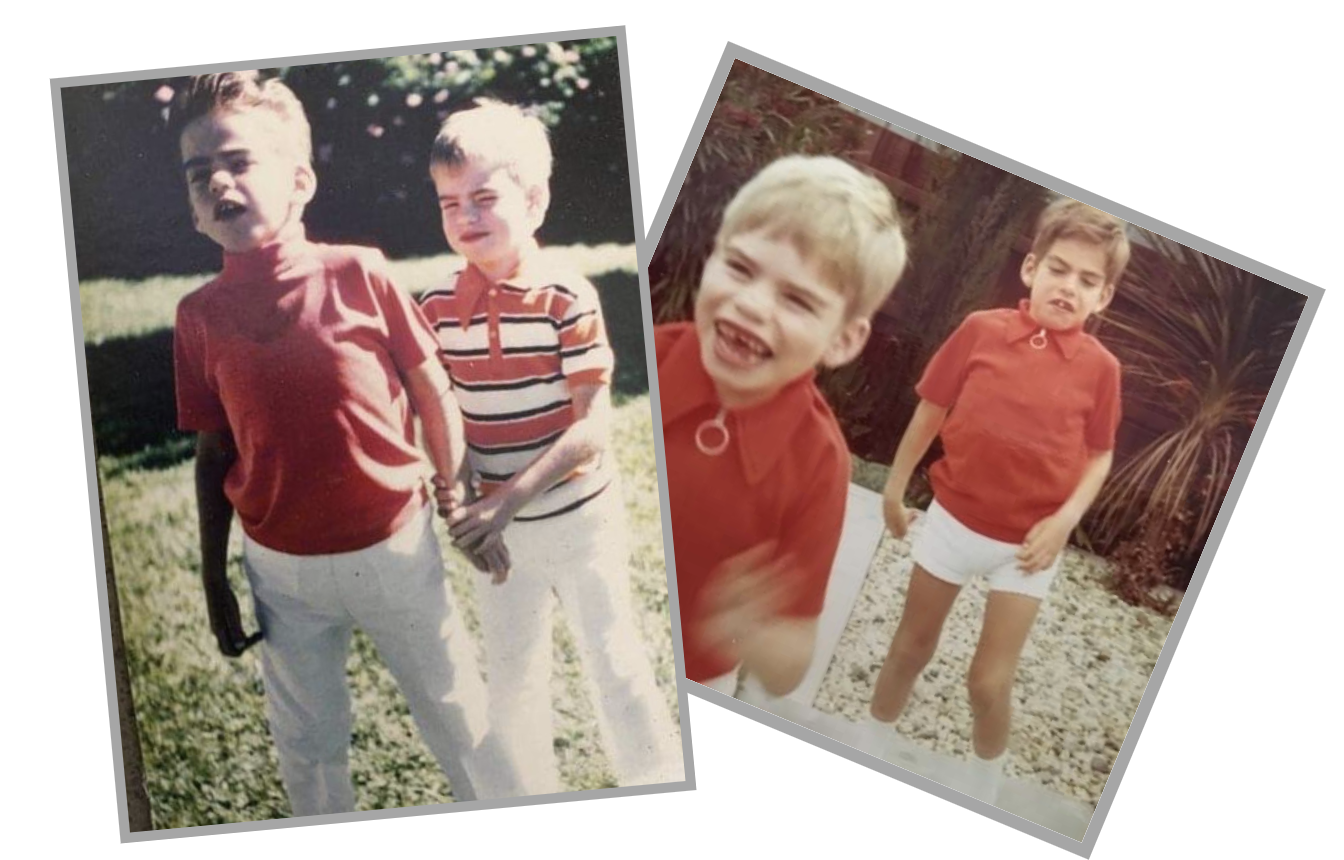 My husband loved country music and when he was home (he wasn't home a lot) he’d play his guitar and sing and this would always calm the boys.

After some marriage problems, we moved with mum to a house in Melbourne Road, Spotswood. The boys were happy with their tractors to ride, and a bus stop out the front of the house where they would watch the traffic and people go by. I had a part-time job in the TAB close to home and my mother would look after the boys.

It was whilst living there that the Westgate Bridge collapsed and all traffic was diverted past our house non-stop. One day Wayne escaped through the gate while I was at work and walked up the middle of the road full of traffic. A woman at the bus stop couldn’t get to him, his mind was on an icy pole at the local corner shop, where he was ultimately rescued thanks to the shop owner recognising him as my son.

Following a second experience with traffic and roads and another rescue I started to believe that someone was definitely looking down on him.

Shortly after this, we purchased a home in Altona where I lived with the boys, mum and my younger brother Ian.

Wayne used to cry a lot and mum would take him in the pusher for long walks. The kids would call Muriel “Mum” because that’s what I called her and they’d copy me. In fact, they called us both mum and it’s like they had two mothers.

Ian was a lifesaver in a different way, because he would arrange for my mum to watch the kids and take me out. These small breaks really helped keep me going and gave me something to look forward to. The day-to-day was a distraction for me and the only way to manage the fear of what lay ahead. 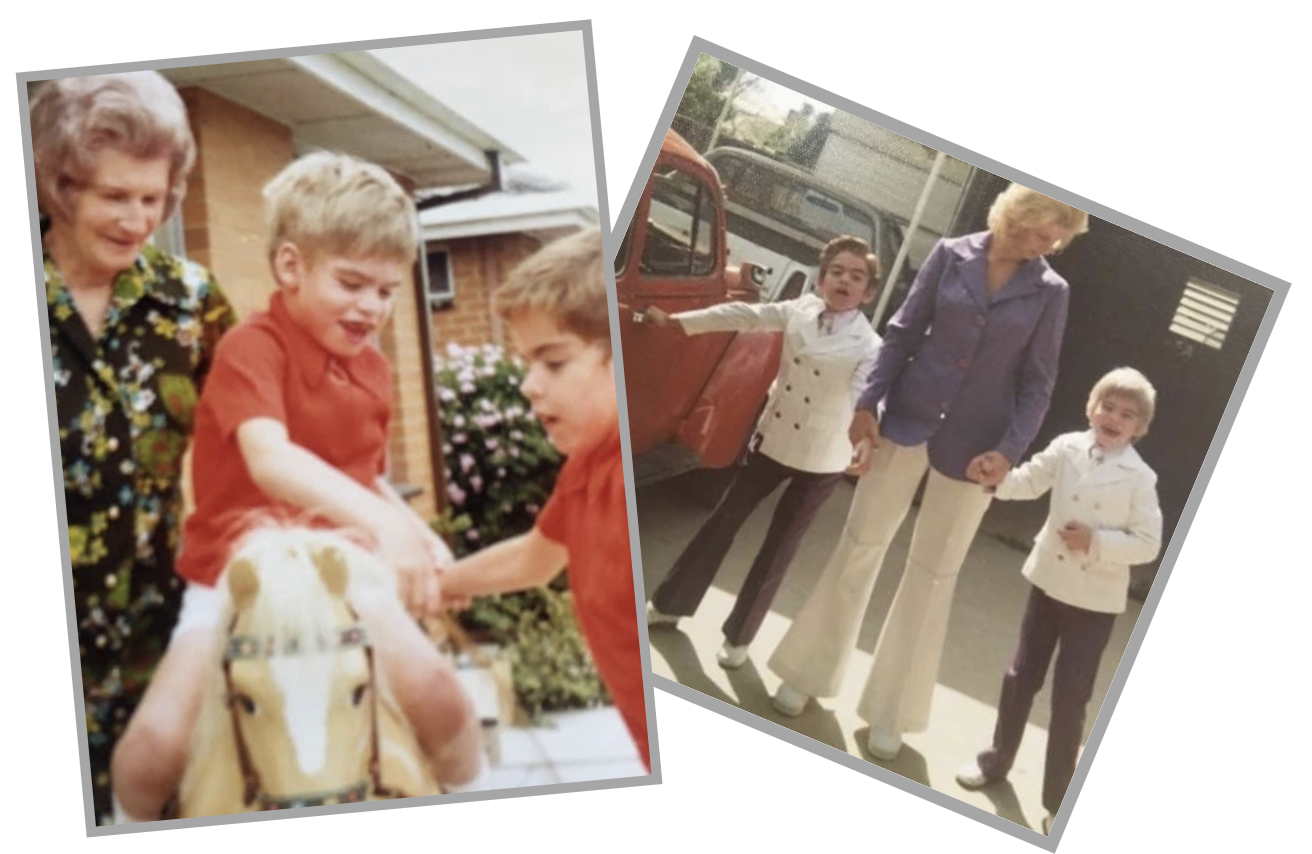 My husband had moved to Townsville, Queensland with work to deliver building materials for the Queensland Nickel Project and wanted us to join him. After 10 months, he found a home up there for the boys and I to move to. Peter was accepted into a Special School for three hours twice a week but Wayne was too old and starting to regress.

It was unlike the support that is available today. It really was a case of “fend for oneself the best way possible”.

My in-laws arrived in Townsville wanting to offer us a break having noticed how Wayne and Peter were dependent entirely on me day and night. They returned to Victoria and decided the boys needed to go to Kew Children’s Cottages (a decommissioned special development school and residential service) in order to give our marriage “a chance to recover”.

My father-in-law had contacts within Government circles and was able to secure a placement for the boys there.

Little did I realise what was in store. They took them to give me “a rest” but this ultimately led me back to Victoria and a battle to return them home. I fought all the way. It was the most terrifying thing I’d ever done and the experience made me the strong woman I am.

I learnt to stand up for my kids with everyone, including my in-laws. Wayne and Peter were my boys and I would look after them to the end! 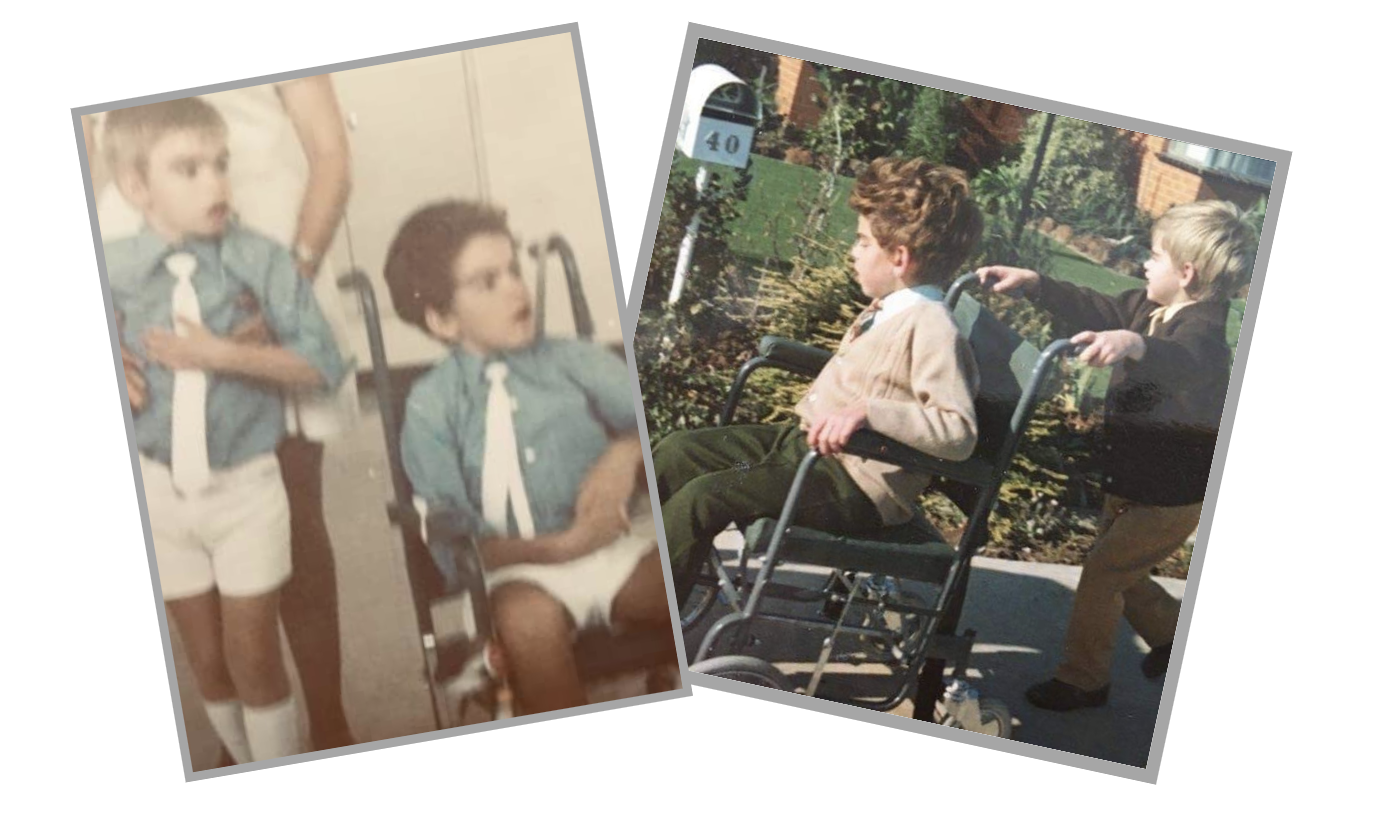 As a family we moved back to Coomboona. The boys were both in wheelchairs by then, and we used beanbags and even an old ambulance with special chairs installed for their comfort in which I’d I take them out driving. My brother Keith was an ambulance driver who lived nearby at the time who would come to assist when needed.

Wayne and Peter lived their final seven years filled with as much happiness as was possible. The house was full of music, there were lots and lots of cuddles, strawberries to eat, walks, daily physio for them and our friends would come to our home to visit.

Their medical needs of course grew. Going to the dentist was a major hospital admission with an anaesthetic. We had to constantly watch their bowel movement, and check that the shunts they had administered in the RCH were not blocking.

Shunts were put in their brains to drain fluid that was causing them agonising headaches. Later I came to recognise the signs when they were about to have a seizure.

I used to have them in the same room with me. Two single beds on each side of mine I could hear them if they were fitting or needed me through the night. This was all part of having been gifted with two special boys with Sanfilippo Syndrome.

My brother Roy died in 1979 from cancer and my older brother Charlie in 1980 from double pneumonia. There was more sadness to come.

The doctors always said to me when one goes, the second one will follow… and that’s exactly what happened. But it was Peter who went first (died 7/2/81), not Wayne. Wayne died just two months later (24/4/81).

Sadly, my mum Muriel died the following year in May 1982. She’d had Alzheimer’s and Parkinson’s disease.  For a time, I’d cared for all three of them in my home. 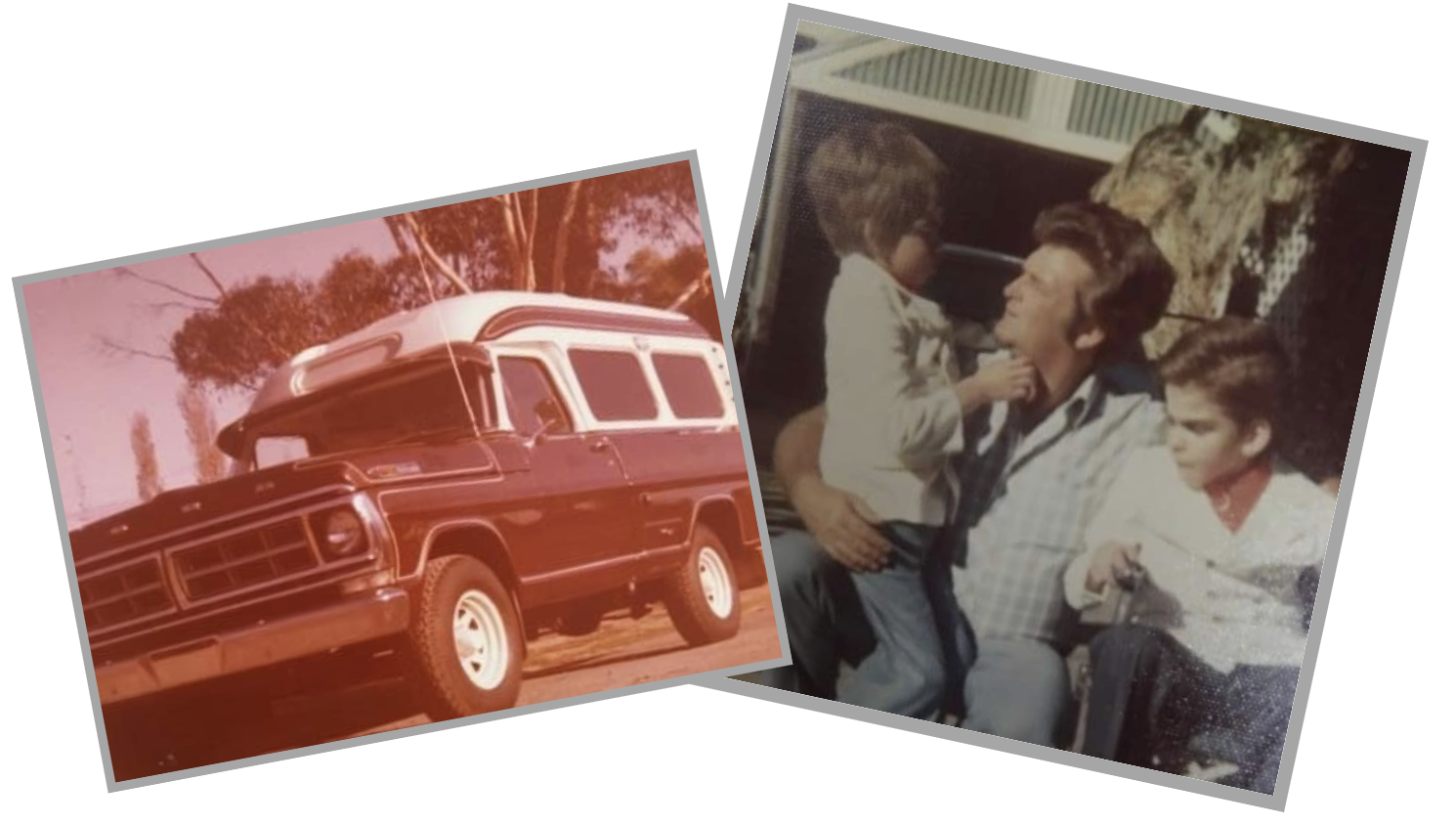 The grief and loneliness that followed was the hardest time of my life. My husband would not talk to his mates or me about his feelings. Our marriage was rocky for the 20 years we had together. After twelve months we went our separate ways and I moved to Sydney.

However, Cec was always a part of my life and until the day he died in 2015 we kept in touch and still cared about each other. My motto is “life is precious”.  I have always tried to live in the moment and take one day at a time and not look too far ahead.

When the boys were little I met only two other Sanfilippo families. Later, the hospital contacted me and asked me to meet new families and share my experience but I think it’s important not to overwhelm people.

These days with Facebook, I can go online and connect with lots of Sanfilippo families from all over the world. It’s a real community – almost like a family. I am inspired by the things the Foundation is achieving in trying to find a cure for our kids.

Thank you for honouring Wayne and Peter. 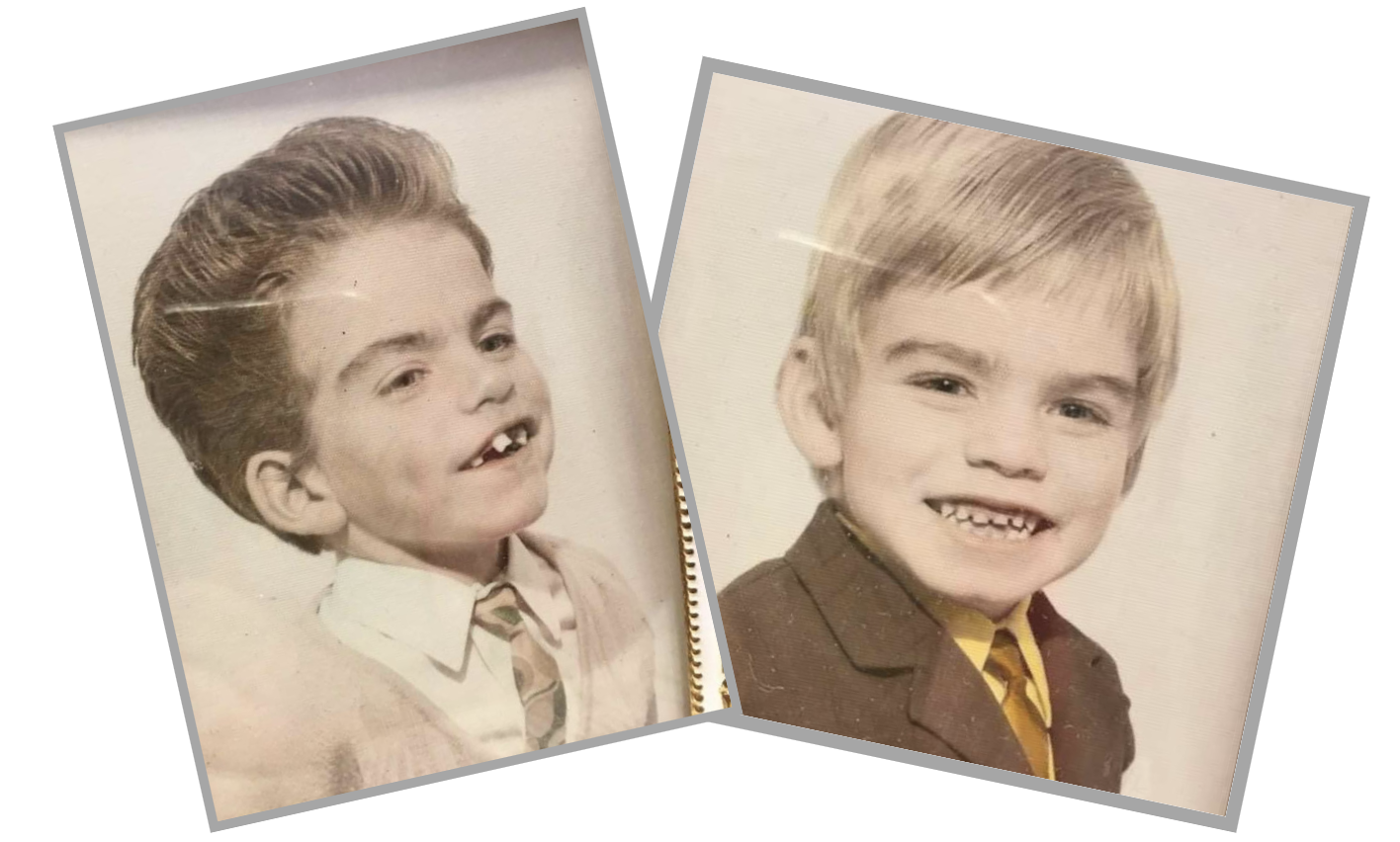