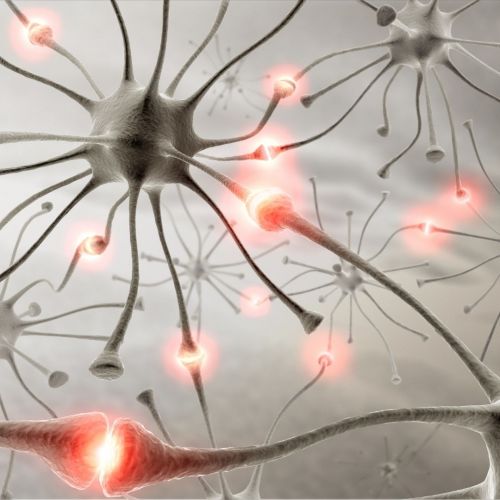 A study led by Professor Alexey Pshezhetsky (University of Montreal) has investigated the role of synapses in the early stages of Sanfilippo using a type C mouse model. Synapses are the connection points between brain cells, and signals must transfer across synapses for messages to relay within the nervous system.

Severe neurodegeneration (loss of neurons) leading to cognitive decline is a clinical hallmark of Sanfilippo Syndrome. However, this symptom appears at a later stage of the disease. It is thought that disturbances in neuron function may instead lie behind some of the earlier symptoms of the disease, such as learning difficulties and challenging behaviours.

For this reason, researchers have been investigating the earliest changes in the brain in Sanfilippo so that they can better understand how to treat symptoms and prevent neurodegeneration.

As critical components of brain cell communication, changes to synapses have been implicated in many neurodegenerative diseases. Synapses have different parts; for example, the parts that send the signal from the first neuron to the next (the synaptic terminals) and the part on the next neuron that receives the signal (the dendritic spine). Prof. Pshezhetsky’s team studied the structure and function of these different parts of the synapse to see how they are affected in mice with Sanfilippo type C.

First, they examined cells from the hippocampus, a part of the brain important in learning and memory. They found that the signalling proteins that are normally found in the synaptic terminals were reduced or abnormally distributed in the Sanfilippo type C mice. The number of synaptic vesicles, the parcels of neurotransmitters that transport the signal across the gap between neurons, were also significantly reduced in each synapse.

They also found differences in the dendritic spines that are the receiving points of synapses from other brain cells. These were reduced in density and size, with differences seen as early as 10 days after birth.

The team also tested the electrical signalling capacity of brain cells taken from type C mouse brains to determine whether the changes in the synapse altered brain signalling. Indeed, there was a significant decrease in the strength of electrical signals in the type C mice cells compared to those from mice without Sanfilippo.

Overall, the results show there is a disruption to the structure and function of the synapses, which impairs their ability to send messages throughout the brain. As changes to synapses are present even in the earliest stages of Sanfilippo, it may help to explain the developmental delays and behavioural symptoms seen at this point in the disease.

Importantly, the study found that treatment to restore enzyme function helped to restore some defects in the synapses: two weeks after four-week-old type C mice had received gene therapy, a key synaptic signalling protein returned to normal levels. This study indicates that treatments targeting synapses could hold promise as treatments for neurodegenerative diseases like Sanfilippo as well as other lysosomal storage disorders.