Research update from the 2021 WORLDSymposium 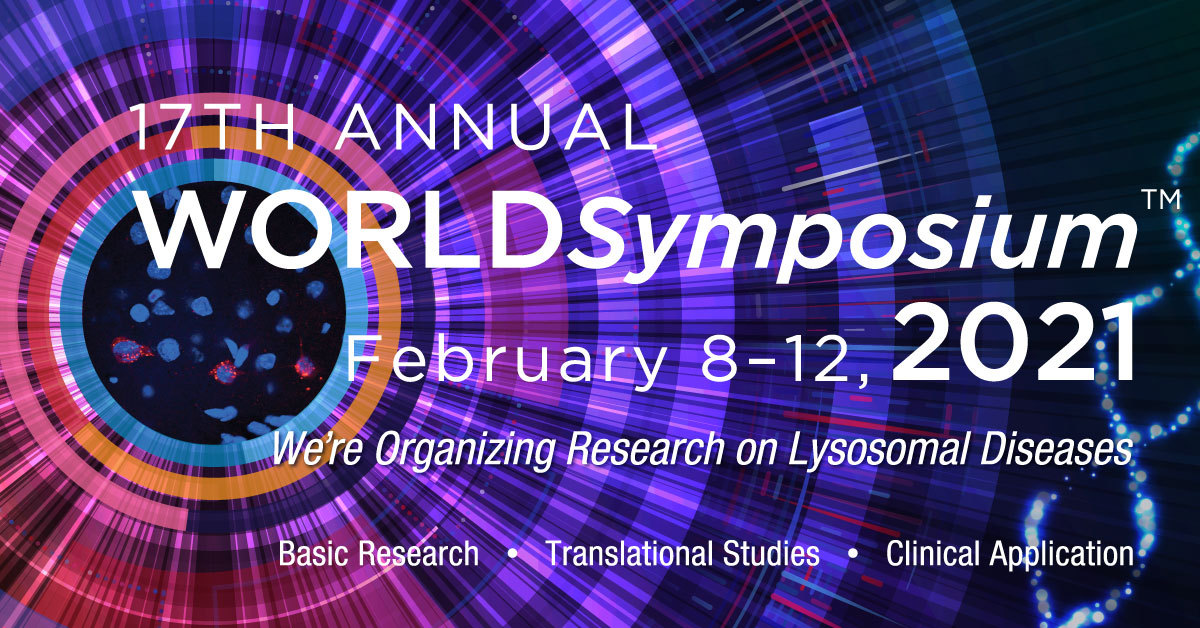 The annual WORLDSymposium was held virtually this year due to the COVID-19 pandemic, but nevertheless provided a fantastic update of progress being made around the world in basic, translational and clinical research into lysosomal storage disorders.

While, of course, we are most interested in the research results specifically for Sanfilippo Syndrome (see below), the conference was also a great opportunity to learn about the progress being made on treatment strategies and technologies in development for other disorders that may ultimately also benefit Sanfilippo.

These included newborn screening strategies, data sharing strategies, clinical registries and outcome measures that are crucial for effective and efficient clinical trials and the approval of therapies. There were also important advances reported on technologies to improve targeting of gene therapy and enzyme replacement therapy to the brain and it was great to see progress being made in strategies to reduce the body's immune response to these therapies that can reduce their efficacy.

Pentosan polysulfate for Sanfilippo type B

Pentosan polysulfate (PPS) is a molecule that has a similar structure to heparan sulphate (HS) that builds up in children with Sanfilippo. PPS is thought to have anti-inflammatory effects and is already in use in people with other disorders such as interstitial cystitis. In previous research in mice with Sanfilippo type A, PPS was found to reduce inflammation and prevent lysosomal abnormalities in cells. In a new study presented at the conference, researchers treated dogs with a naturally occurring Sanfilippo type B mutation with PPS and found that it was also able to reduce inflammation in the brain and accumulation of swollen lysosomes in cells. More research is needed, but the researchers feel PPS has potential as a treatment that could help enhance the effects of gene and enzyme therapies.

Targeting enzyme replacement therapy to the brain in Sanfilippo type A and B.

JCR Pharmaceuticals in Japan has developed a new technology to allow the delivery of enzyme replacement therapy into the brain via an intravenous infusion rather than the more commonly used, but more invasive direct brain injections. The researchers have bonded the enzymes to a molecule called the Transferrin Receptor which can help carry the enzyme across the blood brain barrier. Their results so far in animals have shown that following the intravenous injection, the enzymes can be found throughout the brain and the levels of heparan sulphate are reduced to near normal levels. They will next look at whether the treatment can improve cognitive development in the animals. A company called Denali are also working on a similar technology, and presented their promising progress with this approach for MPSII in mice, showing significant improvements in cognitive learning tasks.

Anakinra is an anti-inflammatory drug already approved to treat rheumatoid arthritis. It is thought that Anakinra could target the inflammation in the brain which is common across all types of Sanfilippo. The trial was developed in collaboration with, and funded by, Cure Sanfilippo Foundation and other community stakeholders. It aims to assess whether Anakinra can improve the behavioural and other physical symptoms of Sanfilippo. Recruitment and data analysis are still ongoing, but so far the trial has treated 8 patients with either Sanfilippo type A or B and is showing encouraging signs with most parents reporting improvements in one or more symptoms, such as movement, fatigue, behaviour, pain or parental stress. Longer follow-up and more detailed statistical analysis of the data is still required to determine if the treatment is having a significant effect on symptoms.

Orchard Therapeutics presented the results to date on the first three patients with rapidly progressing Sanfilippo type A. In this treatment the patient’s own bone marrow stem cells are removed, treated with gene therapy in the laboratory and then returned to the patient. All three patients treated so far were aged under 2 years. Treatment has been well-tolerated in all of the patients and the cells have incorporated well into the patient. They were also able to show that enzyme levels in the blood were present at much higher levels than found in healthy individuals and the presence of GAGs (heparan sulphate and other complex molecules) in the urine fell to normal levels. Data on cognitive development is still to come.

Tralesinidase (trial sponsor Allievex) is an enzyme replacement therapy under investigation for Sanfilippo type B. The enzyme is bonded to an insulin-like growth factor molecule to help increase its uptake into the lysosome. 22 individuals with either rapidly or slowly progressing Sanfilippo type B have been treated with Tralesinidase via bi-weekly intracerebroventricular delivery via a reservoir implanted just outside the brain. The treatment has been well tolerated with no serious adverse events. Follow-up and analysis of other outcome measures is ongoing, but so far they have shown that HS in the cerebrospinal fluid and liver size are quickly reduced to normal levels. The loss of grey matter volume in the brain was also slowed down over the course of 2 to 3 years compared to that seen in untreated children with Sanfilippo type B. 40% of the rapidly progressing individuals also showed a stabilisation or improvement of cognitive development which was more pronounced in the patients who were younger at the start of treatment. It is too early to tell whether the slowly progressing patients had stabilisation of cognitive development. Interestingly, the researchers also found that hearing impairment was stabilised or improved in a substantial number of the individuals.

In total 19 patients have been treated in this clinical trial of an AAV gene therapy for Sanfilippo type A that is delivered via a single infusion into a vein. The  patients have been treated in three groups with increasing doses of the therapy and at different ages. The treatment has been well tolerated with the investigators noting that there were no treatment-related serious adverse events and no clinically significant adverse events. Unfortunately the first two groups treated who were both older and received lower doses have shown no improvement in cognitive development despite reductions in heparan sulphate in the CSF. In the third group of patients, receiving the highest dose, those who were older when treated continued to show a similar rate of cognitive decline compared to untreated patients. However, the three patients treated so far who were under the age of two and half at the time of treatment and have now been followed out to the ages of between 3.5 and 5 years are showing trajectories of cognitive development that are in line with typical children without Sanfilippo Syndrome. This is particularly encouraging considering that they are now at an age where development would be expected to have slowed. 5 more children in this young age group have now been treated and data is being gathered to confirm these results. Abeona have indicated that they will be consulting with the USA Food & Drug Administration to discuss next steps towards approval of the treatment.

More information can be found in the company media release here

Abeona has also been conducting a clinical trial of gene therapy for Sanfilippo type B. In this trial the children treated have predominantly been under the age of 2 years and have again been treated in 3 groups with increasing doses. To date the third group have only been followed up for 7 months. Normalisation of heparan sulphate levels have been seen in all three groups,  no serious adverse events have occurred and only one patient has shown an immune response to the gene therapy that had resolved after 18 months. Sadly no treatment effect on cognition has been seen in the first cohort treated with the lowest dose. Longer follow-up is needed for the 2nd and 3rd groups before any results can be released.

19 patients have been treated in this trial of an AAV gene therapy delivered directly into the brain via an injection into the intracerebral ventricles. The treatment has been well tolerated with no serious adverse events, although further recruitment has been paused while they investigate some unusual signs seen at the injection site on MRI scans. While the cognitive development data is still to be analysed, the team have shown a reduction of heparan sulphate and other secondary storage molecules (GM2 and GM3) in the CSF that is sustained over 12 months.

You can read more about therapies in development on our website here.

Please email us at research@sanfilippo.org.au if you have any questions.