State of play: Development of gene therapies for Sanfilippo

Sanfilippo Syndrome is a genetic condition that leads to childhood dementia. Sanfilippo involves changes to one of four specific genes essential for breaking down a complex sugar, heparan sulfate (HS). There are currently no approved treatment options for Sanfilippo. Several therapeutic avenues are being explored, including gene therapy.

What is gene therapy?

Gene therapy aims to introduce a functional copy of a gene into the body, to treat a disease or prevent it.

In Sanfilippo, gene therapy aims to introduce functional copies of one of the four affected genes: SGSH (type A), NAGLU (type B), HGSNAT (type C) or GNS (type D). The body uses the functional gene to make the enzyme needed to complete the breakdown of HS.

For gene therapy to be effective, the therapy must first get inside cells. As the ‘medicine’ is the gene, and it is made of DNA, it can’t just be given as a pill or injection as it would get broken down by the body straight away. Instead, different technologies are being used to safely deliver the gene into cells, for example: using a harmless virus, nanoparticles, or the patient’s own stem cells. Gene-delivery technologies can also be selected or engineered to help direct the therapy to particular parts of the body where it is most needed, such as the brain or the liver. 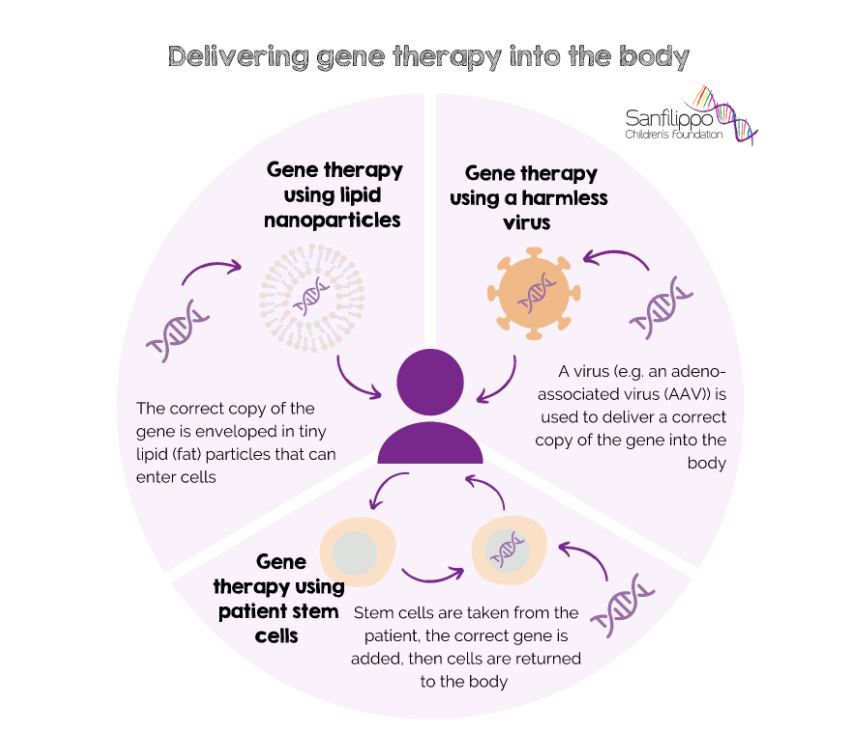 What are the benefits of gene therapy?

By providing a functional gene, the body would be able to make the required enzyme and break down HS. Therefore, gene therapy has the potential to address the underlying cause of Sanfilippo, making it possible to minimise the disease severity or even halt its progression.

It is likely that gene therapy may involve a once-off treatment that can be sustained for a longer period of time. This is compared to other therapies like enzyme replacement, chaperone or substrate reduction therapies that require regular administration.

Gene therapy technology has come a long way in quite a short period of time, for Sanfilippo and other genetic diseases. While many gene therapies are still in clinical trials, two have already been approved by  Australia’s Therapeutic Goods Administration (TGA). Zolgensma gene therapy was approved for eligible patients with spinal muscular atrophy, and Luxturna for eligible patients with a form of inherited retinal disease. Now, there are clinical trials using gene therapy in Sanfilippo patients around the world, and gene therapy may be closer to being approved for use in the clinic compared to some other therapy avenues for Sanfilippo.

What are the challenges of gene therapy?

As there are four separate genes involved for the four subtypes of Sanfilippo, gene therapies would need to be developed for each subtype. However, unlike chaperone therapy, one gene therapy could potentially be used for all patients with the same subtype, regardless of the type of genetic change that an individual has in that gene.

One challenge that has arisen from Sanfilippo gene therapy clinical trials involves the age of the patient at the time of gene therapy administration. In some trials, the emerging evidence suggests that the therapy only appears effective when it is administered to the child before the age of 2 years. More research is needed to understand why this is the case, and what can be done to identify patients earlier or increase the treatment window.

It is also uncertain how long the gene therapy is effective inside the body, and whether patients will need a ‘top-up’ of the gene therapy later on in life. This ‘top-up’ itself may prove challenging: the body can develop immunity against the delivery vehicle used for the gene therapy, making a subsequent dose ineffective. As gene therapy clinical trials progress and new follow-up data is collected, there will be a clearer picture of whether a gene therapy top-up is required.

For some delivery vehicles (e.g. using an adeno-associated virus (AAV)), some patients may have already developed immunity to the AAV naturally without even receiving a gene therapy dose. Previous exposure and antibodies to the AAV9 virus, for example, can occur in up to 20-30% of patients, potentially excluding them from receiving this form of gene therapy.

Finally, gene therapy is an expensive therapy to produce, especially compared to other small-molecule therapies like chaperone therapy or substrate reduction therapy. This cost ranges from hundreds of thousands to millions of dollars per treatment. As gene therapy technologies improve and become more common, it is hoped that this cost reduces substantially.

What is the state of play for research into gene therapy for Sanfilippo?

There are researchers around the world working to develop and trial potential gene therapies for Sanfilippo, including:

Abeona Therapeutics Inc., Lysogene, Esteve and Orchard Therapeutics are currently running gene therapy clinical trials for Sanfilippo type A (information on each of these can be found in the clinical trials factsheet for type A here. All except for the Lysogene trial are currently recruiting, and all except for Orchard Therapeutics are using a viral delivery vehicle. Orchard is using stem cell delivery. In the trials where data has been released, reduced HS has been observed. Abeona has reported promising cognitive data in the three youngest patients enrolled.

There is further preclinical research being undertaken to address the challenges of gene therapy. For example, Prof. Haiyan Fu is one researcher working to explore second-generation gene therapy that has been modified with the hope of increasing its effectiveness, with funds from Aislinne’s Wish Foundation, the Abby Grace Foundation and Cure Sanfilippo Foundation.

The only type B clinical trial currently running is sponsored by Abeona Therapeutics Inc., and information on this trial can be found in the factsheet for type B here. The Abeona trial is based on AAV9 delivery, but a stem cell-based gene therapy for type B licensed by Orchard Therapeutics is in the pipeline.

A completed type B clinical trial, sponsored by UniQure Biopharma B.V., ran from 2013 to 2019 in Paris. In this trial, a single-dose gene therapy was administered, and patients were also given treatment to suppress an immune response against the gene therapy. 5-year follow-up results show sustained enzyme production and support the UniQure gene therapy’s good safety profile. Only the youngest patient, who was 20-months-old at the time of treatment, may have received some benefit in terms of cognitive development.

Phoenix Nest Inc. have type C gene therapy in their pipeline. This gene therapy was developed by Dr Brian Bigger at the University of Manchester, and Phoenix Nest Inc. acquired the rights to this AAV9-based gene therapy in 2018. Further preclinical work is being completed with funds from Cure Sanfilippo Foundation. A clinical trial is planned but more data is needed on the natural history of type C disease first and a start date has not yet been announced.

More information on different therapy avenues currently in, or close to, a clinical trial can be found on our website: https://www.sanfilippo.org.au/research/therapy-avenues