State of play: Development of substrate reduction therapies for Sanfilippo

In Sanfilippo Syndrome, the body cannot break down the complex sugar heparan sulfate (HS). Usually, HS is broken down and recycled after it has done its job, but in Sanfilippo this doesn’t happen and it accumulates in cells. While the build-up of HS affects the whole body, severe neurodegeneration is the most prominent effect.

There is no approved cure or therapy for Sanfilippo, but Substrate Reduction Therapy, or SRT, is one potential therapeutic avenue that is being investigated. 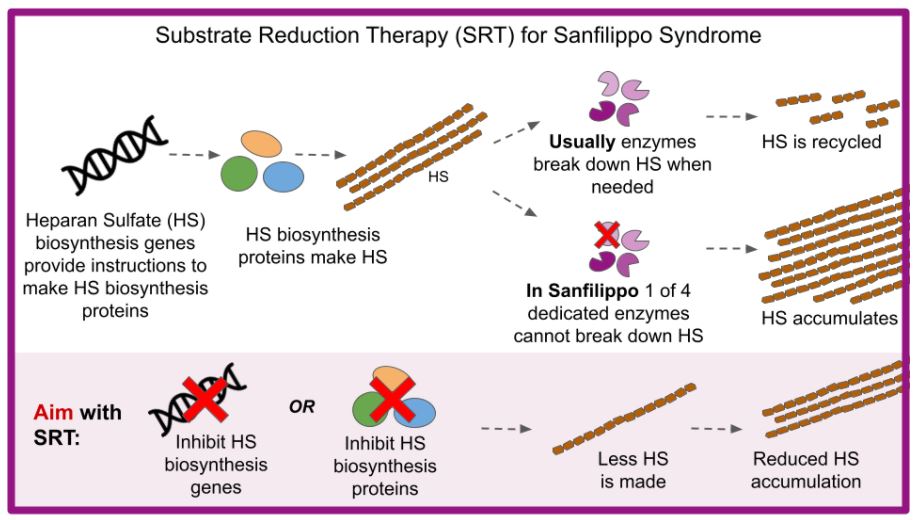 What is Substrate Reduction Therapy (SRT)?

SRT aims to reduce the amount of substrate, or material, that cannot be broken down by the body - in Sanfilippo, the substrate is HS. HS is made by dedicated proteins that help assemble the molecule (biosynthesis). The information to make these proteins is held in specific genes. SRT can be achieved by inhibiting either the genes or the proteins involved in HS production. Less HS is made as a result, leading to reduced accumulation in the body.

What are the potential benefits of SRT?

HS accumulation seen in Sanfilippo overwhelms metabolic processes and leads to further effects like inflammation and cell damage. Other experimental treatments for Sanfilippo are looking at ways to remove HS. However, decreasing the amount of HS made in the first place may also help to reduce these adverse effects and potentially slow disease progression.

There are four subtypes of Sanfilippo, and often other approaches, like gene therapy, are focused on one subtype. However a potential SRT could be used by all Sanfilippo patients. It might also be helpful with other diseases involving HS accumulation, like MPS I (Hurler Syndrome) and MPS II (Hunter Syndrome).

SRT drugs are usually small molecules, meaning they can be synthesised more cheaply than other complex therapies like gene therapy. Also, small-molecule drugs can be modified to improve their ability to reach the brain or be taken orally.

SRT may work well as an adjunct, or add-on, therapy. Using SRT together with another therapeutic approach (like gene therapy or pharmacological chaperone therapy) may produce even better treatment outcomes than using either treatment alone.

There are examples of SRT drugs that have been developed and approved for other diseases, such as the oral SRT drugs Cerdelga® (eliglustat) and Zavesca® (miglustat) to treat Gaucher disease. Like Sanfilippo, Gaucher involves the build-up of material due to an enzyme deficiency.

What are the challenges of SRT?

The main drawback of SRT is that it does not target the cause of Sanfilippo; that is, the changes in the gene, or the non-functional enzyme. Because of this, it may not be as effective on its own compared to other approaches like gene therapy.

SRT drugs are not a single dose treatment and must be taken long-term. Any potential SRT drugs must be carefully tested to make sure they don’t cause toxicity and adverse side-effects in the patient.

If researchers identified a potential SRT drug for Sanfilippo, preclinical studies in animals would be required before a clinical trial can take place. How long these studies might take would depend on many factors, such as whether the drug is completely new, or whether it is an existing drug that has already been tested in animals or humans.

What is the state of research into SRT for Sanfilippo?

From 2014 to 2018, a Phase III clinical trial was undertaken to test the safety and effectiveness of a promising oral SRT candidate, Genistein Aglycone. Unfortunately, no ‘clinically meaningful benefit’ was seen in the 21 children who took part and investigations were discontinued.

Further basic research is needed to identify and examine potential SRT drugs. There are researchers around the world working to develop potential substrate reduction therapies for Sanfilippo. Some examples of these include:

Professor Andreas Schulze (The Hospital for Sick Children, Canada) received a grant from the Sanfilippo Children’s Foundation (SCF) and Cure Sanfilippo Foundation (USA) in 2016. He screened thousands of drug molecules to find potential SRT candidates for Sanfilippo. These candidates inhibit an enzyme called NDST that is important in making HS. The two foundations awarded follow-up funding in 2020 for Prof. Schulze to evaluate the lead candidates in Sanfilippo, Hurler and Hunter disease cell models.

To treat neurodegeneration, SRT drugs must be able to cross the blood-brain barrier to get to the brain. An Incubator grant from SCF was awarded to Dr. Maria Francisca Coutinho (National Institute of Health, Portugal) in 2019 to develop an SRT targeted to the brain for all Sanfilippo subtypes.

Also in 2019, Dr Adeline Lau of Flinders University, Adelaide, received a Translational grant from SCF and Fondation Sanfilippo Suisse (Switzerland) to test SRT and PCT candidates in type A mice. The project may indicate whether SRT can be used as an effective adjunct therapy in Sanfilippo.